In the center of Bovec stands a parish church of St Ulrich. The church may not seem anything special from a distance. But, we strongly recommend that you take some time for sightseeing. Its walls are hiding quite a few interesting stories.

The church is dedicated to St Ulrich who was quite a celebrity in the Middle Ages. He was born in 890 in Augsburg, Bavaria.

As a child he was small, skinny and always sick. His parents were hiding him from other people to protect him from mocking. Nevertheless, Ulrich grew up in a bold young man and decided to become a priest. Smart and quick minded was soon promoted to bishop of Augsburg county.

Then the medieval idyll of 10th century was roughly interrupted by barbaric hordes of Magyars. They were robbing and burning land after land. For quite some time, no one would resist them.

Magyars had come up with a rather clever tactic. They avoided all the big and well-fortified towns. Instead, they prefered attacking smaller towns and villages without strong walls and well-trained army to protect them. Of course, Magyars stole anything there was to steal. Their favourite trophies were churches with golden chalices and other insignia. What couldn’t be taken was burnt.

Soon the news of their bloody expeditions reached out all the countries around Europe. And so the glory of the fearful nation, of which previously no one has ever heard, began to grow.

In 955 Magyars arrived at the city walls of Augsburg. Their arrival was expected. The inhabitants of this Bavarian town suspected that they might get the unfortunate visit.

Bishop Ulrich took the defence of the city into his own hands and ordered a thorough renovation of the old city walls. He also organized soldiers training.

When Magyars came on their horses and set up tents, Augsburg was ready. Epic clash of the armies is today known as the Battle of Lechfeld.

Bishop Ulrich gained eternal fame as a fearless military commander who was riding with his men against the enemy, unarmed. With Divine’s help Bavarians were victorious and the barbaric hordes were defeated.

How Ulrich became a saint

German emperor of the Holy Roman Empire Otto I. later led the armies of different European nations and stopped the hordes of Magyars.

They were pushed back beyond the borders of Otto’s empire to the land of Pannonia. There they initially abandoned nomadic way of life and got rid of their nasty bloody habits. Soon they became farmers and decent neighbors. Eventually Magyars accepted Christian religion and established their own country today known as Hungary.

What about St Ulrich? He lived less exciting life at his old age. He died on July 4th 973 and was proclaimed saint just a few years later in 993.

Since Slovenia suffered under the terror of Magyars quite a lot, St Ulrich is an important person in our country. He was deeply admired by Bovec landlord Markvart III. Eppenstein who even named his son after the popular saint. Small Ulrich later become the patriarch of Aquileia and ordered the construction of the first church in Bovec.

So, the first church in Bovec was built on the same location where it still is today. Small, wooden, modest sanctuary was built in the Romanesque style. Yet, this simple shrine was mentioned by Pope Celestine III in his Bull. Its mention in such an important document clearly indicates existence of an important Christian center in Bovec in the first millennium. Unfortunately, nothing is left of this building.

In the 13th century church was renovated in the Gothic style. This time the master builders used stone material, which was much more durable than wood. On the outer facade as well as inside the church you can still find some elements of this building.

In the 18th century, local church authorities decided to thoroughly rebuild the church. This time, in the Baroque style. Church was greatly enlarged, they changed the ground plan and moved the cemetery.

Church got its present appearance in the 19th century. Although the building was later renovated several times after the wars and earthquakes, each time the master builders maintained its typical neo-Romanesque style. 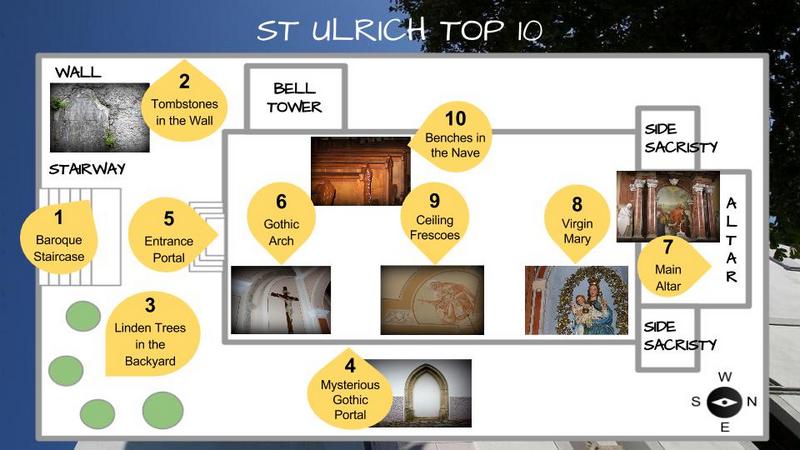 The third church was built in the Baroque style. The old Gothic structure was greatly enlarged when master builders encounter a problem-lack of space. The ambitious project was about to fail since the plateau on which the church stands was too small.

Then, drastic decision was taken. They decided to turn the church’s ground plan. Both the Romanesque and Gothic church were aligned east-west like most of the churches. The new church was now being aligned north-south.

But then a new problem appeared. How to access the church. Old entrance portal was standing on the western facade, the south side of the church was surrounded by a wall behind which the terrain was slope. Masters decided to tear down part of the wall and arrange a magnificent staircase off the hill.

2. Tombstones in the Wall

Yet another problem was solved. But not the last one. The old Gothic church was surrounded by a cemetery. There were graves exactly where the new path was supposed to lead to the church.

In order not to disturb the souls of the dead, the cemetery was moved to a different location. They found a suitable place behind the church where it still is today.

The wall surrounding the church was renovated many times through the turbulent history and each time old tombstones from the cemetery were added. There you can see them today, if you walk along the wall around the church building.

3. Linden Trees on the Backyard

At the top of the staircase on the right side of the church you see some young trees. These are linden trees, planted in 1992, when the Bovec Church of St Ulrich celebrated the 800th anniversary of its first mention in the Bull of Pope Celestine III.

Before entering the church, take a look at the Gothic portal, built in the east (right) facade of the church. It’s pointed Gothic arch disrupts the smooth white facade.

During the Baroque drastic renovations this portal was added to the wall. We know it was not originally standing here. In fact, no one knows exactly where it standing. However, it was probably used as a side entrance in the Baroque period.

It is also interesting that the old documents are mentioning a building (possibly an administrative) which was built nearby the church by Bovec landlord Andrej Von Scharfenstein. Apparently a corridor was connecting both buildings. No one really knows whether this passage took place underground or on the surface.

During the recent renovations they were looking for the remains of the hall, but found nothing. Therefore, there is a theory that this mysterious portal was the entrance to the secret hallway that led to the even more mysterious building. But there are also no traces left of the building as well.

5. Entrance Portal with the Statue of St Ulrich

The entrance portal is built in neo-Romanesque style. Typical white facade hides massive stones, the only material that was around in abundance.

However, the main and side walls are narrowing with heights. This way, master builders managed to reduce the effect of gravity, and prevent the danger that the structure would collapse under the weight of the material used.

Above the entrance you can see the three niches in which three statues are standing. In the main niche is a statue of St. Ulrich from 19th century, in the side niches the statues of St. Peter and St. Paul are standing.

As already mentioned, the church used to be differently oriented than it is today. This can be best seen inside the church. When you step through the entrance to the narthex, turn right. You can see the outline of the conical triumphal arch in the wall of the nave.

It used to connect the nave to the presbytery (part of the church building where the altar stands). It is still possible to see the capitals supporting stones which suggest that the Gothic church was a stone cutting masterpiece.

Then take a look at the opposite wall. There you can see a wooden door of the former entrance portal. It’s now partially walled in by a bell tower. The width of today’s building is actually the length of the nave of the first two churches.

The main altar of the church is of course dedicated to St Ulrich-the patron saint of the parish church and Bovec. It’s made from local Rombon reddish stone. The altar is the biggest in Primorska region, of which we are justly proud. There you can also see a painting of St. Ulrich blessing his people.

However, the former church authority once came upon a brilliant idea to sell the altar to Vienna, being worth quite a lot of money. But the locals revolt and so the altar remained in Bovec.

8. Side Altar of the Virgin Mary

On the right side altar a statue of the Virgin Mary with baby Jesus is placed. This statue was once part of the altar in the church of Holy Trinity which used to dominate the main square of Bovec, but then changed its purpose. Today, on the exact location restaurant Letni Vrt is standing.

Church of St Ulrich shared the fate of its parishioners in difficult times. The church was repeatedly damaged in all the wars and natural disasters. And, then again restored. The most recent, during the post-earthquake reconstruction.

Painter Marija Bersan Mašuk painted frescoes on the ceiling, which compliment the exceptional story of the building. The central fresco shows the Pentecost event. Perhaps more interesting are the side frescoes, which run along the nave. They show the saints of other churches in the area, like church of St Leonard. Even those that don’t stand anymore-St. Lawrence, St. Silvester and Holy Trinity.

Locals have always been known as religious people. They deeply respected the holy day Sunday. Masses were always well attended.

In order to avoid misunderstandings all the seats in the church benches were marked. The plates with the numbers were mounted in the wood. Every family paid an annual fee for their number. Those who paid more sat closer to the altar poorer sat at the back. It was also possible to lose the right to your seat.

Usually it was denied to unmarried mothers and women living with men unmarried. The history stays suspiciously silent about the fate of their partners. Therefore, we assume that the gentlemen were not given the same measures.

Children also didn’t have their seats. During the mass they were sitting on the steps that separate the nave from the presbytery.

The child was given the right to a seat at Confirmation. Confirmation was usually held in early July, on the day of St. Ulrich.

Still today we celebrate the 4th of July as the local holiday. Since St Ulrich is not only the patron saint of the parish church, but also the patron of Bovec.